since I last posted here. I promised it wouldn’t be my last post and I’ll stick to that. I now feel like leaving my last post until two months after coming home probably wasn’t the best of ideas. Getting back into the mindset of what this past summer was all about now feels eerily distant. Yet only two months ago it was my life. Completely. I ate powerbars I’d found on the ground, didn’t shower for days and my spirit lifted every time I saw a gas station. The greatest thing I’ll take from this summer is that one really does adapt to any situation. Just give it enough time and it happens. Before I started riding the actual journey itself seemed like a crazy thing to do for two months. Upon reaching San Francisco the prospect of NOT riding a bike for 8 hours every day seemed strange. And now, two months later, I can’t even really visualise the emotions I went through a few months ago.

I’d really like to extend a thank you to those who donated money to Earthworks this summer. Together, we raised $3115 in about one month. I couldn’t be happier with that outcome! Earthworks too have expressed gratitude at our efforts this summer. So THANK YOU!! ❤ 🙂

On top of that, I want to thank YOU – all the people who supported me this summer. I still remember that tingling feeling of being out in the middle of nowhere, struggling like hell, and not really knowing exactly why, but still feeling massively supported. I knew people were rooting for me and that always gave me an extra kick in the butt. All the e-mails, messages, texts and phone calls really meant the world to me!

I feel a little bit bad that this last post is not one of those “for future transamers”-posts with list of what you should bring (google it) , what not to do (stress), what to do (be prepared for Nevada), where to go (The Rockies!!!), who to see (any homeless people you find on the way), what to watch out for (robbers), how to sit on your bike (on top), which power bars to eat (those you find on the ground), which kind of handlebars you should have (drops), which direction you should go (west). But this was never one of those blogs so I’ll keep it that way.

If you’re thinking about doing a similar trip: Just fucking do it! You’ll love yourself AFTERWARDS for making the decision to do it. While doing it you may not always love it. Or rather, you definitely won’t.

Enjoy the video and see you next time!

It took three hours to retrace the two thousand miles I struggled for a month to bike across – and as I exited the airplane I was immediately reminded of how stupidly humid it was on the eastcoast and in the midwest. You know when it feels like hitting a wall of heavy, hot air when you go outside? It hadn’t felt like that for a long, long time.

Meanwhile, here’s an ad that pretty well shows how I’ve been operating the last few months 🙂 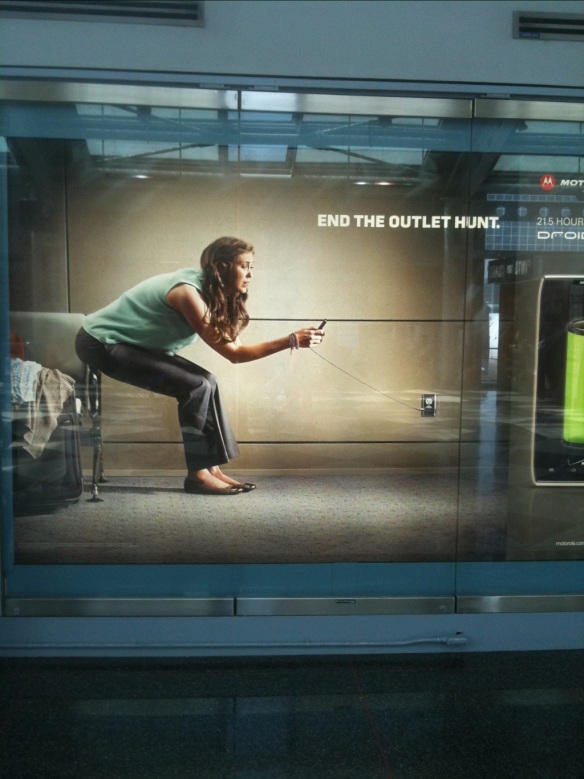 If you’re traveling with a bike, don’t fly United!! They have a bike fee in place now – $200 each way for international flghts and $100 for domestic. So ridiculous. I was so close to completely losing it at the woman at the check in desk but I restrained myself.

Stopfrackingarouns has always taken matching seriously. I went the extra mile this time. Obviously. So long San Francisco. Hope we see each other again soon.

Generally, people were always very impressed with what I was doing. That was of course cool and boosted me along. One day in Virginia I met these chicks by the side of the road who were really hard to impress. They just didn’t fall for it.

Link to the article:

And so, at the snap of my fingers, it’s over. I’m not sleeping on a picnic table in a community park tonight, nor am I getting up at 05:30 to eat tortillas filled with tuna for breakfast. I don’t have to stress about making my 76 miles and 3 posts a day – nor do I have to worry about people making donations or reading and liking my blog. I won’t have to ask people for directions, but I also won’t be making friends with complete strangers on a daily basis. Tomorrow, I won’t be forcing my sore leg muscles to propel me further down the road than they want to – but I also won’t feel the intense satisfaction of just having forced my muscles to propel me those extra miles. It’s a great feeling knowing where I’ll be sleeping the next few nights – but I’m sad knowing that I won’t be discovering new places every minute of every day.

Saying good bye to Daniel today was really, really sad. He and I became great friends during these three weeks and it’ll be strange not waking up to him throwing a fit about being covered in ants or being pissed off about sleeping on some rocks on the ground. The guy is completely unique. Like a great work of art that was created during some very hard and trying times – as they often are. He has if anything reinforced my notion that the most interesting people have often had very difficult lives. Daniel’s life experience has taught him to never expect anything. He has zero sense of entitlement and just works his ass off for every step he takes in life.

I’m probably a bit too tired to be trying to sum this whole journey up right now – and I think it might be too early for that just yet anyhow. I’m going to have to let this all sink in for a while. Meanwhile, have a few pictures of the Sierras: 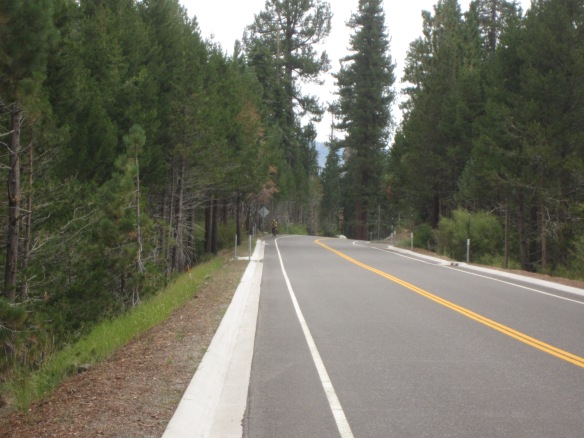 Daniel fighting his way up Luther Pass (the shorter one before Carson Pass).

An energy block I found on the ground and ate. This is how desperate you get for energy. It wasn’t bad – just a little bit dusty.

There were a lot of lakes in the sierras! 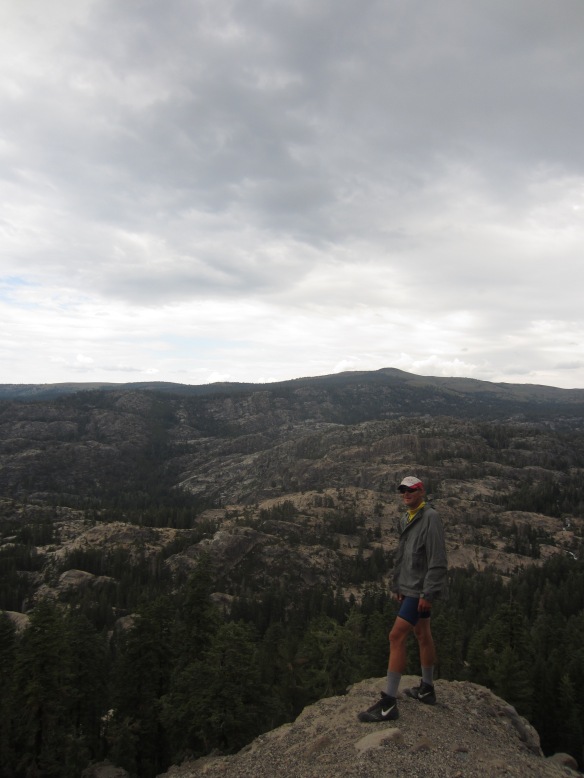 In the middle of nowhere, we found a super cozy little bar. The building had been there for about 150 years and had a beautiful wood interior. It was sat right atop a place where three county lines intersected – and the bartender told us about how they used to make use of this back in the day. Back then the bar was actually on wheels, so when someone from county A walked through the door, they’d roll the bar into county B and therefore not have to pay any liquor taxes. The bar was now safely fastened to the ground and liquor taxes seem to be paid. Cool little spot though!

And then my camera died and I have no pictures at all until this morning! Here’s a photo of the white Cherokee belonging to the man selling crystal meth.

And here my breakfast from this morning. Ridonkulous. You know how much it cost?! $27!!! Something must have gone wrong with the check but when I asked about it the waitress explained that the pancakes cost $7.80, the bacon and eggs totaled at $5.50 (and then I had coffee and OJ) plus tax. That supposedly cost $27. I thanked her, paid and tipped. About an hour later I went “wait a minute, that does not make sense at all”. But then it was too late. I must have had a sign on my forehead saying “RIP ME OFF I’M SWEDISH”. Or sales tax is really high in California. 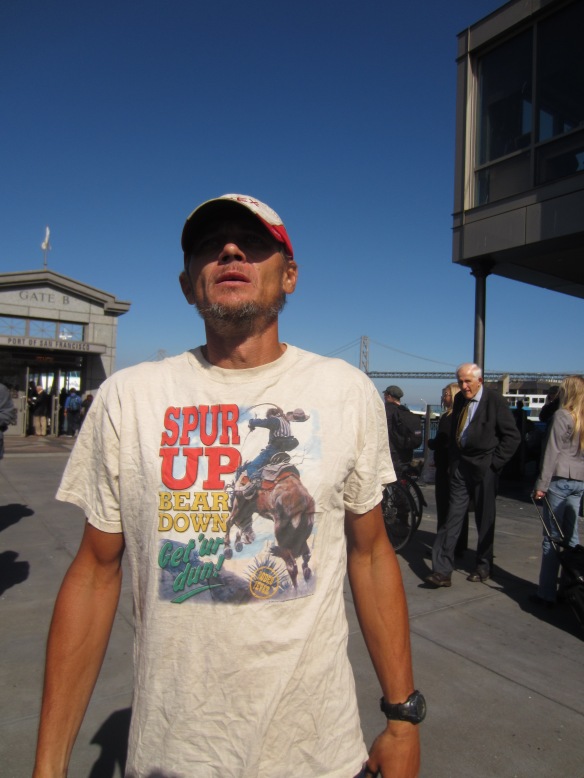 I donated the shirt John gave me to Daniel. It suited him better I think!!

Here’s the ONLY picture of san francisco so far:

That’s the golden gate bridge you’re looking at. It was so cloudy and cold that we left pretty quick. But I did set foot in San Fran – that’s what matters.

OK. Good night. This is weird. I don’t know when I’ll be back on here – but I will. I want to thank some people – and I have some movie clips to put up. So I’ll be back. Maybe tomorrow.

Two stoked idiots on the ferry to San Francisco!! Couldn’t be stokeder:) Daniel finally got in touch with me this morning and I convinced him to come with me on the ferry. 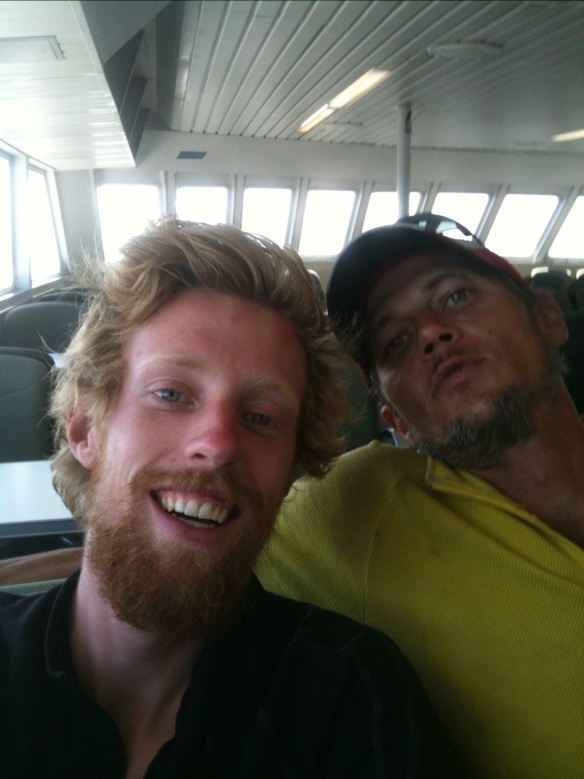 Some dude just went knocking on all the room doors. I went and opened since I thought it was the cleaners here to tell me to get out. Check out time you know?

But it wasn’t the cleaners. It was a homeless guy.

“yo, that your Cherokee right there?” pointing at a white Jeep.
“No”
“Aight, you know where he lives?”
“I think he’s somewhere on top”
“Aight” now trying to peek in my room. “you got crystal?”
“Do I have meth? No”
“aight, where’s the guy with the Cherokee?”

Man… I’m in paradise at last.

I woke up in Fairfield this morning. In a hotel for the first time in three weeks. Actually, this is the first time I’ve paid for a place to sleep since I met Daniel. It pretty much had to be done though. He’d ended up some miles ahead of me, and when I finally had ridden through the Delta of the bay area and arrived in Fairfield – his phone was off. He’d fallen asleep under a bridge.

I tried going to the city park to sleep there but it really didn’t feel safe. In the pavillion where i wanted to sleep there were two people sitting – a man and a woman. As soon as I biked by they got up and ran in different directions. Don’t know what that was about. It was cold last night, too! Really cold. The last few miles of my 82 mile ride yesterday I was freezing. That’s the bay area I guess. Cold air from the pacific blowing in.

God that’s weird. I’m at the fucking pacific ocean. I’m done. All I have to do now is roll the 20 miles down to Vallejo (where the pin is dropped) and take a ferry across the bay. If I really wanted to I could ride the looong way around and come in on the Golden Gate bridge – but at this point I’m choosing practicality over symbolism. Even the Adventure Cycling maps say to take the ferry so I guess it’s not cheating.

20 miles left. I still can’t fathom that at all. I’ll get back to you once I set foot in San Francisco.