Hope you’re enjoying your wednesday! I’m sitting in a nice air-conditioned café in downtown Sterling, KS. I’m taking a break here because it’s just too crazy outside and biking at this time will only serve to make me feel really bad and angry. I’ve got about 60 miles down today but I thought I’d try my hand at some night riding this evening. The coming stretch is even crazier than the one I had a breakdown on yesterday (sorry about that stupid post, I love biking). This one is 49 miles of straight road with no services. The road literally doesn’t turn for 50 miles. What I’ve learned so far is that the wind – my biggest antagonist – starts blowing a few hours after sunrise and then settles down in the late afternoon/early evening. This means that doing this coming stretch at night would probably be awesome.

I have one great little story from today:

I pulled into a small side street to find shade as I was passing through a town named Buhler. It was about 9am and this was my first stop of the day. As I was standing under a tree eating a banana an older woman came out of a house and approached me. She asked me about my trip and was delighted when she found out that I was from Sweden. “I’ve been there!” she exclaimed.

Her name was Norma, and back in the day she used to travel a lot with her now late husband. She immediately ran inside the house to get me a bottle of water and her diary from the Sweden-trip.

Norma was wonderful and her spirit reminded me of my own grandmother’s a little bit. Her husband died three years ago. He was a mennonite and a conscientious objector in world war II. I didn’t quite catch what had happened – but she seemed to be saying that he had been used as a guinea pig in some medical experiment, and that he had attained some sort of medical condition from those experiments which in the end killed him at the age of 87. It was heartbreaking listening to Norma express how much she missed him, how hard it had been to go back to church after he died and how she really disliked living in that big house alone without him.

Norma went back inside, and I pedaled on. Further down the road I passed by the house of someone with some humor: 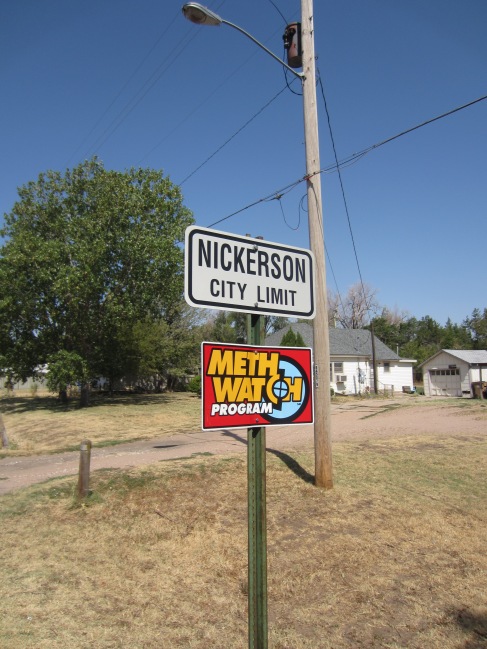 I stopped for some lunch in Nickerson actually. That’s what happened there. Lunch. I ordered the daily special which was chicken and noodles. That’s all it said – so I thought it would be a regular pasta dish with chicken (I shouldn’t be eating chicken in places like this because their chicken is definitely from Tyson Growers, but it’s hard on the road). The waitress said the special came with a Jello Salad and eventually put one in front of me as an appetizer. I didn’t know what the hell to do with it. What she called a jello salad was a piece of jello in a bowl with whipped cream on top. I was in such shock that I ate it before I realized to take a picture of the thing. Then came the main course. It was chicken with small pieces of noodles, placed ON TOP of a healthy serving of mashed potatoes. I wouldn’t have been able to come up with that one either, but I ate it and it tasted pretty damn good.

That’s what’s been going on so far today! Since that piece of pie I’ve biked another ten miles and then spent most of my afternoon in the Sterling community pool. No pictures of that though. I’ll let you know how the night riding goes tomorrow! Peace

4 thoughts on “My morning with Norma”